Finding the True Value of Food 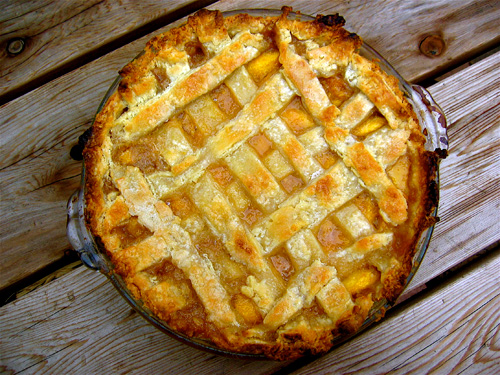 The problem with being interested in food is that it seems so frivolous. Sure, everybody has to eat, but caring about what you’re eating seems, well, indulgent. If you can afford enough food to feed your family, then you should stop there. Because there are more important things in life than food — war, disease, global warming, getting your hair cut. Right?

I grew up in a family that enjoyed food but still thought of it as fuel. Nutrition was important; cooking was not. My mother raised her kids on “lite” cheese and tubs of margarine because that was the conventional dietary wisdom back then: fat is bad, margarine is better than butter. Meals were civilized but not particularly appetizing. My parents liked good food but didn’t know how to cook it, and didn’t want to learn how. I grew up thinking that it didn’t much matter what I ate so long as I tried some of everything offered (that was polite) and tidied up afterwards.

It wasn’t until high school that I met people who ate differently. Many of my peers embraced vegetarian or vegan diets for ethical, health, or taste reasons. Others simply had higher expectations for what their food should taste like. With few exceptions, however, most of us couldn’t cook. That changed in college, when we had kitchens of our own for the first time (and cafeterias with dreadful glop on offer). So we began to learn how to shop, and how to cook.

A year or so after graduating, however, I mentioned to my mother that one of the many things I was glad I’d learned in college outside the classroom was cooking. She was appalled. “We paid for you to go to college so you could learn to cook?” she demanded. “What a waste.” College was for thinking; cooking was for doing.

But any fool can sling a frozen dinner into a microwave; it takes thought in order to cook well. You need skills, and those skills aren’t just the knife techniques taught in culinary school. You need to know where and when to get or grow good ingredients. You need to know whether that fish is really fresh or whether that peach will taste as good as it looks. If you’re going to spend time and effort on dinner, you want that dinner to taste good as a result. And you quickly learn that so-called “timesavers” — packets of dehydrated seasoning, for example — are not flavor-savers. Quite the opposite.

So you find yourself buying only real food — the local berries, the unsalted butter — because it tastes better. You notice that the cheap pork doesn’t taste as good as the organic stuff, say, so you decide to do a little reading about hog farming, and when you’re done — if you’re still a committed meat eater, that is — you tell yourself, “Forget that mushy meat, even if it is cheap.”

And on the evening news, as you’re preparing for dinner, you hear about people “rioting in Egypt and Haiti” over skyrocketing food prices. Or about the evolution of “drug-resistant bacteria” thanks to the antibiotics-laden chicken sold in much of the country. Or about the “disappearance of maple syrup” because winters in the Northeast aren’t cold or long enough anymore to make the trees produce enough sap.

And then, somehow, that trip to the barbershop doesn’t seem quite so important.

Photo courtesy of Culinate
If you’re going to the trouble of making a peach pie, you might as well make sure those peaches are tasty first.

Caroline Cummins is the managing editor of Culinate. Read more >