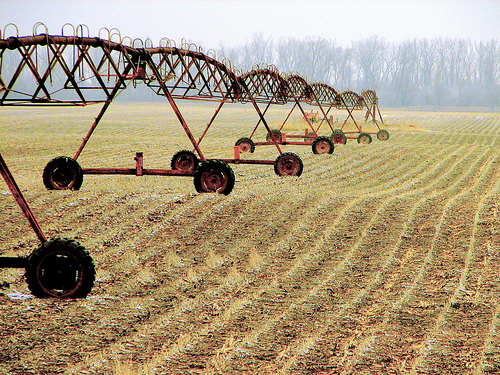 This is the second and final portion of my interview with Dan Imhoff, the author of Food Fight: The Citizen’s Guide to the Farm Bill, a book about the outcome of the 2008 Farm Bill and what we can do to effect change despite business as usual in Washington. He will be taking part in Slow Food Nation’s Food for Thought panel series, and is co-author of the Vision Statement for Agriculture and Food Policy for the 21st Century, being presented at SFN August 28th.

Part 1 of this interview can be found here.

Paula: What would a different, better version of the Farm Bill look like?

Dan: First of all, farmers would have to be enrolled in some kind of stewardship program before they can get anything at all, and they should be rewarded for how well they farm, instead of how much in commodities that they are putting into the pipeline. And why direct giveaways [for things like waste mitigation]? I mean these are big corporations, why can’t they be loans, why don’t they have to be paid back? I mean they are just complying with the Clean Air and the Clean Water Act, these are things that, if they are treated as industries, which they really are, they would have to be doing with there own money. There has to be some kind of responsibility. Are you helping to preserve the land, maintain it so that we can pass it on to the next generation? Are we doing research, finding beneficial ways to grow crops, for when we are not going to be able to afford petroleum-based fertilizers? Are we starting to build the infrastructure for a regional food system we are going to desperately need when oil tops off at $500 per barrel? Are we rewarding farmers for growing a diversity of crops, actually contributing to producing healthier food that can be fed to the kids in our schools?

Paula: Do you see agribusiness lobbyists as the main obstacle to a fairer Farm Bill and a better system?

Dan: Agribusiness lobbyists and the inability to enforce the anti-trust laws that we already have on the books are two huge obstacles, absolutely. I would say there is a real lack of a vision, getting back to what you asked earlier about the objectives, I don’t think there are clear objectives for a healthy food and farming system like you might think, that there are “ten principles” that everyone who walks into the USDA looks at on the board and goes, “better food, better farmlands, healthier future for America.”

Dan: Yeah, I think increasingly, you see that there are some pretty good studies that say that it is the small, diverse systems that can either equally produce or out produce most industrial systems. I think we will increasingly see that the cost of maintaining those industrial systems, the fertilizers and long distances and all the chemical inputs [becoming] unaffordable. I would hope that regions all across the country are starting to have meetings to say that this is the kind of food system that we want, so in three years time, they can go to their elected representatives. Because that was really a big part of what was absent in the discussions this time, long term planning, region by region. I think extremely quickly we are going to have to have a far more regionally based production capacity. And I don’t think people are aware of just how quickly things can change. How quickly the cost of energy [and] severe storm events can influence the food and farming sector.

Paula: You are producing the Vision Statement for a new Food, Farm and Agriculture Policy, being presented at Slow Food Nation. Could you give us a taste of that proposal?

Dan: We will try to make the point that a healthy food and agriculture system is the basis of a secure country and a secure world. And the current system that we have is not sustainable, it is out of balance and it is breaking down. We can see that in the food riots, escalating food prices, and in parts of the country where they’ve re-plumed the hydrology to industrially farm corn so that [the land] can no longer absorb water in huge flood events. And I think that what we need is, I hope, some kind of vision that says it’s our duty, as citizens, as parents, as farmers, as eaters, to try to make the healthiest food system we can, that we can pass on to the next generation. One of the things that was severely absent in this Farm Bill was the voice of the medical community. The medical cost of the obesity crisis is four times what we are spending on the commodity programs. Just think if we started to think differently, if we started to think of healthy food as preventative medicine. Ultimately it’s going to save us costs in other areas. We should be investing in our health, first and foremost, because I think in the long run it will save us money and it will do so much more to help us to feel healthy as a nation.

Paula: What can the average citizen do?

Dan: Just learn as much as you can. Don’t let your representatives off the hook. Vote with your fork, eat like an activist, and just try as best as you can to bring your goals for the planet in line with your diet and how you vote and how you live your life.