Kulintang and the Filipino Community at Slow Food Nation 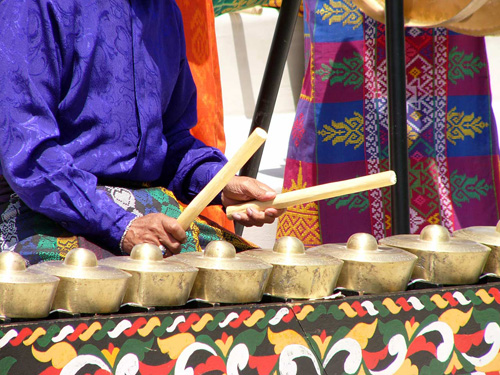 The Agrarian Arts program at Slow Food Nation engages diverse cultural groups in the Bay Area to celebrate traditional and emerging cultural practices around food and agriculture. Among the participants are members of the regional Filipino community.

During the 1920s and ’30s, Filipino immigrants in California worked as laborers harvesting asparagus and fruit. After 1965, Filipinos became one of the fastest growing immigrant groups and many of them moved from farming to professional and service occupations. In this process of growth and assimilation, the Filipino community—as is true with many immigrant populations—has struggled to preserve their native traditions.

Filipinos have a rich culinary history that includes indigenous ingredients and influences from Southeast Asia, Mexico, Spain, China, and the United States. The complexity of Filipino cuisine comes from generations of trade and immigration, colonization, religious integration, and social transformation.

As part of Slow Food Nation’s Labor Day events, the Agrarian Arts program will host a performance by the Kulintang Dance Theatre, a Bay Area-based company dedicated to performing and recovering musical traditions from the Southern Philippines.

Kulintang is popular traditional music and dance originally from the Maguindanao, Maranao, and Tausug peoples of Mindanao Island. The function of Kulintang music in the community is to provide social entertainment. Some families play it at home after dinner as part as their daily routine, or for visiting friends and relatives. Kulintang is also performed during large feasts, harvest festivals and significant life ceremonies such as baptisms and weddings.

Look for the Kulintang Dance Theatre at the Soap Box in Civic Center plaza. Other performances will be announced in the upcoming weeks.