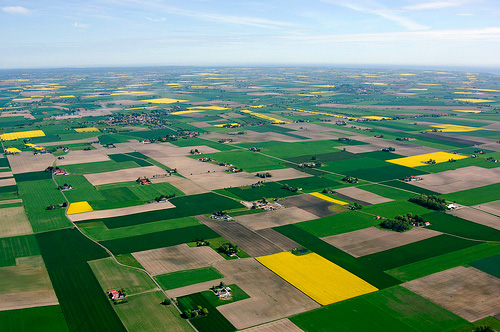 Dan Imhoff is the author of Food Fight: The Citizen’s Guide to the Farm Bill, a book about the outcome of the 2008 Farm Bill and what we can do to effect change despite business as usual in Washington. He will be taking part in Slow Food Nation’s Food for Thought panel series, and is co-author of the Vision Statement for Agriculture and Food Policy for the 21st Century, being presented at SFN August 28th.

I spoke with Dan recently and asked him some questions about his work and his upcoming participation in Slow Food Nation. This is Part I of the interview. Part II will be posted tomorrow.

Paula: Congress just recently passed a five-year Farm Bill, why is it such an important piece of legislation?

Dan: The Farm Bill determines what crops we grow, where we grow them, under what conditions, how cheap different types of foods are in the marketplace, how well we take care of our land and waterways and wild habitats, and it ultimately determines our health and our nutrition.

Dan: It started out of desperation. Our soil was blowing away, literally, and we were also witnessing, I think, the end of the agrarian era in American history and we were massively moving towards cities and an industrialized economy. Then we had the Depression, and there were lots and lots of people out of work and hungry. The farmer had only one way to try to get ahead in this new economy and that was to plant as much as possible, but the irony was that the more that they planted, the less it was worth. And ultimately they planted so much, so radically, in places that have never been plowed, that they created the Dust Bowl. The early programs were designed to try to compensate farmers fairly to give parity, and they tried to peg the value of any given commodity, whether it was peanuts, cotton or rice, with a real value in an urban environment. And for decades, the rural versus urban parity was just way out of whack. So they tried to set some price floors, and give a fair price so that the farmer could actually get his or her money back. A lot of these programs were loan based, and if you couldn’t pay back your loan at the end of the season because the price was too low, you just gave your crop as payment, and so the government got into the grain storage and distribution business. This goes all the way back to Confucian times, and Biblical and Egyptian practices.

Paula: When and how did it change?

Dan: For many decades, in order to be eligible for programs, you had to put a certain percentage of your land aside in conservation. And this encouraged you not to plant marginal land, and it restricted the supply somewhat to try to [keep] prices at a certain level, [so as] not to over saturate the market. In the 70s, I think that we just had this idea that we were going to become the grain exporter of the world and that we just needed to expand and produce as much as possible regardless of how we produced it.

Paula: Do you think that the policy objectives of the Farm Bill are still relevant?

Dan: The policy objectives definitely don’t seem to be aligned with the problems that have really started to surface in 2008, and by that I mean escalated petroleum costs, escalating food costs, unpredictable climate events, and the nutrition epidemic that seems to be really gripping the country.

Paula: The bill was passed overwhelmingly in congress, are there some positive elements to it?

Dan: Well there are always some positive elements, but I really feel like we are being held hostage, and that our leadership is at fault. Millions and millions of citizens came into the Farm Bill debate. They were mainly asking for reform of the commodity titles, the 30 – 40% of [Farm Bill] spending that goes for direct or indirect payments (subsides) for crops.

Paula: I assume by what you are saying that you think these positive elements of the bill are not enough to make a real difference?

Dan: No, you’d have to be out of your mind to not be angry [at] how little reform actually took place. All you can hope is that we are going to have a new secretary of agriculture, and maybe we’re even going to have a whole new envisioning process in the USDA, and that the first thing that they are going to do is come in and say we need a 21st century food and agriculture policy. It needs to affect every decision that we make, every policy that we sign.

Paula: So those benefiting from the Farm Bill are those larger farms that own the most land and are producing the most, and getting the most in subsidies?

Dan: Well that one tier, definitely. The people who make out the most are the people who are buying the commodities in markets that are completely saturated. Those who are buying the raw materials, the cotton, wheat, rice and soybeans, and especially the corn. And if you look at the Farm Bill, the main beneficiaries are big feedlot operations, because they get the low cost feed. They are paying sometimes 20% less than they would without the subsidies, and it’s keeping them going. There should be no subsidization without social obligation. I think that’s what the taxpayers and the concerned citizens were trying to say. You want money from us, there has to be some kind of social benefit in return.