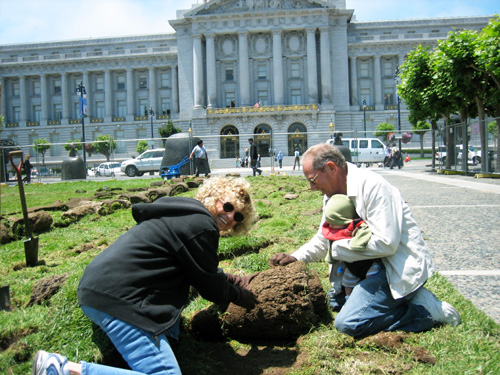 With the freezing summer fog whirling around us, Slow Food Nation Victory Garden Manager John Bela and his team began the installation of the city’s first edible garden in front of City Hall in 65 years. In true San Francisco style, the folks who practice their morning exercises on Civic Center plaza didn’t seemed fazed in the slightest, as a chain-link fence went up around them and the construction site. It was truly exciting to witness the groundbreaking of what could be one of the most important civic statements regarding the future of community food production. Radio and television crews came and went as tourists and locals wandered in and around the site, watching the sod cutters slice neat strips of lawn. John and his crew started pulling back the sod and lifting the heavy grass and dirt onto wheel barrows. Soon thereafter, West Portal residents Meredith and Bill Denny showed up and started loading free sod into their car. “We were going to go to Home Depot until we read the ad on craigslist for recycled sod,” Meredith said. “Now we’ll have City Hall lawn in our backyard.” An hour later, Scottsdale residents and Phoenix convivium members Steve Lewis and Carol Mills-Lewis arrived with their five-month-old grandson, Liam Whelan. Liam in tow, they spent several hours helping the crew dig up sod. Google Café sent over delicious sandwiches and will be generously donating lunch for the crew and volunteers for the next 10 days of garden installation. Stay tuned for more sod removal and landscape fabric installation.