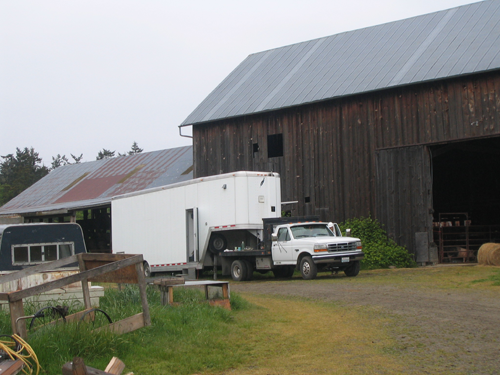 I am a city girl born and bred, with city needs and city habits. My junior year of college, in the suburbs of Philadelphia, I took a course called “Religion and Ecology,” in which we read everything from the Jewish laws of kashruth to Buddhist texts; Heidegger’s “Technology;” to “The Monkey-Wrench Gang.” At the end of the course I vowed to spend time on a farm, to look a chicken in the eye as it died, to bear witness to the slaughter of a cow, something that would earn me the right to eat one of these sentient beings.

When I graduated from college I moved back to NYC and hit the pavement running, my farm dreams something quaint and faraway. I became a vegetarian, thinking that if I could not come to terms with animal slaughter, if I could not find the time to go to the farm, then I would refrain, altogether, from eating meat.

But what a terrible vegetarian I was, making exceptions for street food in Mexico and an annual NYC burger. This lasted for five years, on and off, until I gave up, gasping for meat like a drowning woman for water. And hadn’t my vegetarianism been the coward’s choice?, I asked myself. I had found a way out of my vow since it was a helluva lot easier than finding my way to a farm.

So imagine my sense of wonder, when four years after giving up on vegetarianism, and twelve years after graduating from college, I found myself on the farm, present for the slaughter of two sheep. I had traveled to Lopez Island, off the coast of Washington state, in order to visit the community of farmers who make up the Island Grown Farmers Cooperative. This collaborative is in possession of the first ever USDA certified mobile slaughter facility. The reasons for building a mobile unit were particular to their island status: farmers had to go off island to slaughter and then bring the meat back to the island. This wasn’t cost-effective, so most people just brought their meat to the mainland and then sold it there. The ironic result was that the island was having a food access issue; the meat was being raised there but not eaten there.

There is a need for mobile slaughter facilities all over this country because everything is being geared more and more towards the large-scale producers, so that there are very few processing facilities for small farmers, making the market increasingly favorable to large industrial operations and less and less favorable to the little guy. All the little ones are gone, and in their wake are large facilities that are geared for huge numbers of animals. This means you have to travel farther to get to them, sometimes prohibitively so.

Before I headed out to Lopez, I spoke to Holly Freishtat, who was hired early on to do a needs assessment of the island. I asked her what she learned and she said that “the issues this island community is facing, of farmers not having access to local infrastructure, and consumers not having access to the local foods they demand, is no different from what rural and urban communities are facing around the country. I thought they were unique because they were surrounded by water and now I have realized that it is a result of a centralized global food system. We have to build the capacity and infrastructure for our farmers and consumers to have local foods.”

Back to the farm (not the first farm I’ve been on in the past two years at my job, by the way, not by a long shot): I approached with the jitters, and in the first moments I had to suppress tears. But those tears were the tears of a city girl who is so soft-hearted she cannot even train her cats to stay off the kitchen counter. Those were not the tears of a woman who tore into a burger the night before; I would not let them be.

Watching the farmer next to me, I was humbled by her graceful understanding of the cycle of life. She raised these sheep with tenderness, and she watched them die with tenderness. The parts of the animal that are cut away (the head, the hooves, the skin, the innards) are composted on the farm, eventually enriching the very soil that grows next year’s crop of vegetables. To see this is to learn more in 30 minutes than I could have hoped to learn in my semester-long “Religion and Ecology” class.

To see the IGFC mobile slaughter facility in action is to understand what a successful venture this has been – for business, yes – but even more, for the health and well being of the animals. The animals live well in the fields, then enter the barn they’ve known all their lives. They are processed humanely and the work is slow, careful, and meticulously clean. I watched it from inches away, and though it was challenging at first, I watched it open-eyed.

I left the island utterly convinced of mobile facilities’ ability to step in where small/mid-size infrastructure has crumbled away. It works for the farmers, and it works for the residents of the islands. It’s an amazing sensation to drive around the island and see the animals, and then to know—not just because someone told you, but because you’ve seen it with your own eyes—exactly where your food has come from.