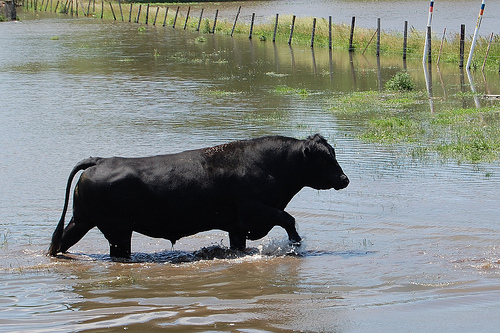 Iowa experienced the flood of the century 15 years ago. That, of course, was a different century.

Over the last week Iowans have seen floods unlike any in living memory. 1400 city blocks in Cedar Rapids were inundated with water up to 11 feet deep. 16 University of Iowa buildings were flooded. Interstates 80 and 380 were closed by water flowing 2 feet over their bridges. Levees have given way in Des Moines and Columbus Junction. 36,000 Iowans are newly homeless.

All this will have lasting impact on our state and its neighbors, but the larger impact may be felt across the country and around the world. An estimated 2 million acres of freshly planted farmland is under water. Statewide, about 20 percent of soybeans and 10 percent of all corn grown is either lost or at risk of being lost, according to the Iowa Department of Agriculture. The smaller sustainable family farms of the region are hit particularly hard because they lack many of the federal protections afforded the large commodity growers, but those big corporate farms grow roughly a third of the corn and soy in this country and the ripple effects on our already weakened economy will spread just like the floodwaters. Even the stockpiles left from last season’s bumper-buster harvest (those that were not themselves ruined by floodwaters), cannot be shipped to market because railroad bridges are closed or washed out completely and the Mississippi River is closed to barge traffic along Iowa’s entire eastern border.

Closer to home, my dear friend Susan Jutz, director of the area’s largest CSA, lost her 102-year-old barn to the storms. Restaurant owner Jim Mondanaro’s flagship restaurant is underwater, with all its equipment, furniture, and a $12,000 inventory of food. Scott McWane’s Dairy Queen, in the family since 1951, survived a Packard through it’s front window in 1958, 6 feet of water in the basement in 1993, and a tornado that opened it up like a pizza box in 2006. When the Iowa River Crested on Sunday there were 8 feet in that same basement.

While some CSAs have lost entire crops and acres of land, the CSAs that went unhurt are trying to get their food to families who have lost their homes.

83 of Iowa’s 99 counties are state and/or federal disaster areas. Whole towns are evacuated. Family businesses lost. Restaurants underwater. The rebuilding process will take years and be in the billions of dollars.

Slow Food Iowa is in the process of determining what it can do to assist the affected farmers, wineries and restaurants. We’ll soon be turning to the wider Slow Food world for help. Meanwhile your advice and your prayers will be most welcome.

Donations are currently being accepted to assist in recovery for farmers and food producers connected to the Slow Food community. If you would like to make a donation, click here or email Kurt Michael Friese at k.friese[at]mchsi.com.