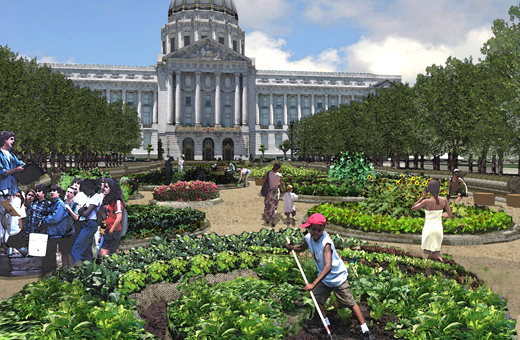 Beginning July 1, the lawn of San Francisco’s City Hall will undergo a transformation from grass carpet to edible garden. The installation of the Slow Food Nation Victory Garden marks the first time that City Hall has hosted an edible garden since 1943. We will begin by pulling up turf (which will be replanted in other parts of the City’s green areas) and planting beets, lettuce, kale and many other heritage varieties of vegetables. The food grown in the garden—most of which will be ready for harvest during Slow Food Nation’s Labor Day event—will be donated to those with limited access to healthy, organic produce through a partnership with local food banks and meal programs.

Slow Food Nation is producing this project in partnership with Victory Gardens 2008+, whose mission is to respond to the social and ecological challenges that San Franciscans and all urban residents face in creating more self reliant, ecologically sound and socially just urban human habitats.

The Victory Garden project takes its name from 20th Century wartime efforts to address food shortages by encouraging citizens to plant gardens on public and private land. In the early 1940s, gardens sprouted in front yards and vacant lots, and produced 40 percent of the nation’s vegetables. San Francisco’s victory program became one of the best in the country; Golden Gate Park alone had 250 garden plots.

The SF Victory Garden program redefines “Victory” in the context of modern urban sustainability: “Victory” means growing food at home for increased local food security and to reduce the food miles associated with the average American meal, not to mention as a way of saving money during a time of economic instability. As Deborah Madison pointed out today at Culinate, the Victory Gardens of WWII exist only as memory and history, but in the near future “we might once again have to feed ourselves, and even if we don’t have to, there’s much to be said for growing some food and working outdoors.”

The Slow Food Nation Victory Garden will serve as a demonstration and education centerpiece leading up to and following our Labor Day event, providing visitors the opportunity to learn about urban food production practices.

We’re looking for volunteers—experienced gardeners and novices alike—to help us keep the Slow Food Nation Victory Garden thriving from July – September 2008. For more details and to enroll as a Victory Garden Volunteer, please email your contact information and availability to info@slowfoodnation.org with “Victory Garden” in the subject line.